The economic and market outlook is expected to follow one of three paths. Some forecasters expect stagflation, as higher interest rates push economies towards recession but fail to prevent engrained inflation from falling rapidly. Others see inflation, which has been caused by increases in commodity prices fueled by pandemic restrictions and the war in Ukraine, as being temporary. They expect that lower demand, caused by higher prices and higher interest rates, will lead to recessions in the West and falling inflation. The last scenario foresees the fall in inflation and demand from these forces as likely, but that, the continuing recovery from COVID restrictions, strong employment numbers and elevated consumer savings, will enable the US, in particular, to avoid recession. We see the third of these scenarios as the most likely, but given the risks of the first two, we have focused this year’s tactical moves on protecting against these, by reducing exposure to growth focused equities and adding to diversifiers such as hedge funds and tactical managers.

Each fortnight inflation continues to dominate headlines, often closely followed by news on interest rate hikes and stock market volatility. The US Consumer Price Index (“CPI”) hit 8.6% year-on-year for May, above consensus expectations, with Core CPI (excluding food and energy) coming in at 6.0%. The continued increases in inflation have quietened economists touting its transitory nature and reduced the Federal Reserve’s (“Fed”) credibility. However, central bankers will be focusing on the Core CPI number which saw a modest decline from April’s figure of 6.2%. CPI and Core CPI are currently experiencing their widest gap in 10 years as the more volatile food and energy components, not included within Core CPI, continued to rise. The Fed made its latest move to dampen demand on 15th June, raising interest rates by an additional 75 basis points. This is the largest hike since 1994. Fed Chairman Jerome Powell also indicated that “a 50 or 75 basis point increase seems most likely at our next meeting” in July.

COVID restrictions in some Chinese cities are being re-imposed already, with citizens having only witnessed an easing within the last month. China is the only major country to have avoided a significant COVID wave, with peaks of only 30,000 new cases per day, compared with the peak in the US of almost 1 million new cases per day. The major issue facing Chinese officials is the slow vaccine rollout with estimates of around 50% of the general population having received two doses, and only 20% having had the third ‘booster’ jab. Whilst the re-opening is expected to aid global growth, any setbacks continue to be damaging.

The energy sector, which has been the only positively performing sector in the US market year-to-date, has come under pressure from politicians worldwide on account of the gains made from higher oil and gas prices. Some governments are considering “windfall taxes” on the sector, with the proceeds to be used to ease consumer pain. Given the thematic trend on clean energy there has been significant underinvestment in oil extraction and production which has likely exacerbated current supply issues, whilst on the demand side, consumer desire to travel has increased dramatically post-lockdowns. The chart below demonstrates one of the tailwinds energy companies are enjoying, with retail fuel (manufactured by “cracking” or refining crude oil) prices increasing by more than the underlying crude oil price, boosting refineries’ operating margins. 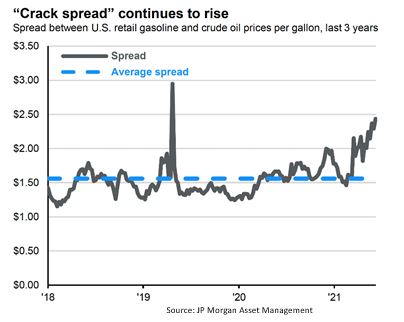 Although we have not invested in cryptocurrencies, we have been monitoring their progress. Over the past fortnight Bitcoin has fallen over 25% to below $22,000 reaching levels last seen at the end of 2020 and 50% lower than the start of the year. Some cryptocurrency lenders and exchanges have halted customer withdrawals putting further downward pressure on crypto tokens and listed cryptocurrency firms’ prices. Cryptocurrencies seem to be positively correlated with risk assets and recent movements are likely to draw further scrutiny from regulators.

US job creation remains robust, with nonfarm payrolls for May coming in at 390,000, above the forecasted 325,000. The Manufacturing Purchasing Managers Index (“PMI”) for May fell short of expectations by 0.5 points, at 57.0, but still comfortably in expansion territory.

UK GDP fell 0.3% month-on-month, lower than consensus forecasts of growth of 0.1%. The UK services PMI exceeded expectations for May, hitting 53.4 against estimates of 51.8. On the continent, Euro-area GDP rose by 5.4% year-on-year for the first quarter of 2022, above expectations of 5.1%. French and German manufacturing PMIs marginally beat consensus estimates at 54.6 and 54.8 respectively but Italian figures disappointed missing expectations by 1.6 at 51.9.

In China, the Caixin Manufacturing PMI for May was 48.1, marginally beating forecasts of 48.0. Japanese GDP fell by less than expected year-on-year, with the reading coming in at –0.5% rather than the predicted –1%.