Despite a rebound on Friday, equity markets posted losses for the 7th week in a row, leaving the US market with its longest weekly losing streak since 2011. As of 15th May, in local currency terms the US equity market is down 15.1% and European equities down by 10% this year.

There is plenty for investors to worry about: inflation, higher interest rates, supply chain disruption and the risk that higher commodity prices and interest rates could lead to a recession. We are not ignoring these worries and have been looking to position portfolios to protect from potential setbacks.

Investors in general are currently very cautious.  Investor sentiment as measured by a survey conducted by the American Association of Individual Investors recently recorded its worst ever monthly reading, with bearish views outnumbering optimistic (bullish) views by a record 3½:1. Only 16.4% felt bullish on the market, the lowest since 1992… Counterintuitively, this may be good news for investors.

The green lines on the chart below shows the average return from the stock market at different levels of optimism. Looking at the first column, when less than 20% of investors felt bullish the average return on the market over the next two years was around 35%, whereas when most investors were optimistic, the future returns were lower.  In short, investor sentiment is a contrarian indicator. The more nervous on markets we all become, the greater the future returns are likely to be.

Given the above and the relatively attractive level of current market valuations highlighted at the top of the next page, we are not rushing to cut our equity exposure dramatically, we are even considering whether we should now add.  In recent weeks we reduced equity exposure a little and particularly growth style equities and added some value style equities, defensive tactical funds and/or hedge funds within most portfolios. Now, we feel that the likelihood of a strong recovery in markets later this year is too high for us to reduce equities further. 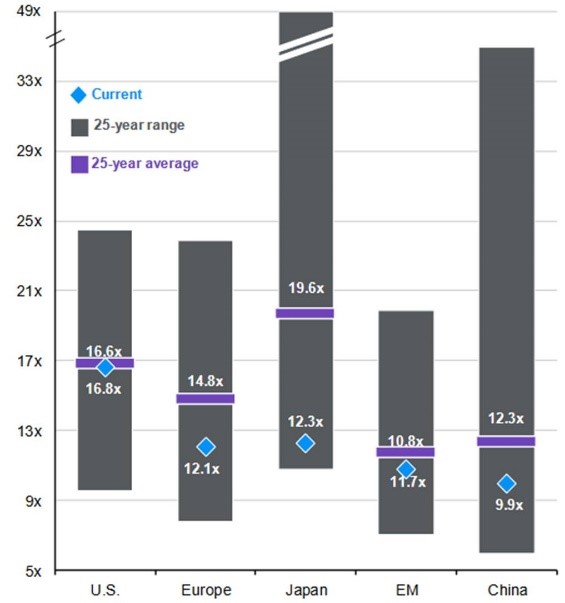 You are likely to have seen the table above (Global Equities Valuations) before. It shows the price to earnings valuation of markets based on predicted earnings for the next 12 months (the blue diamond) compared to the average valuations of the past 25 years (the small purple bars) and the range of valuations during the period (the tall grey bars).  Today, not only is sentiment at a low level, but also valuations are generally attractive compared to history.

Inflation news continues to dominate markets. In the US, the Consumer Price Index (“CPI”) headline and core numbers surprised to the upside with 0.3% and 0.6% gains. Thanks to base effects from last year, the year-on-year numbers fell, but they were also 0.2% higher than expected with headline CPI at +8.3% and core CPI at +6.2%. In China producer prices rose 8% year-on-year in April and in Europe, the European Commission now expects inflation across the block to average 6% for 2022 as a whole.

China’s Covid related lockdown restrictions have exacerbated global supply chain bottlenecks in recent weeks, but these restrictions could start easing according to Shanghai’s deputy mayor Wu Qing who announced that the city is aiming to reach zero-Covid at the community level in the next few days and will then start to steadily ease traffic restrictions and open shops. This may become a key market theme in the coming weeks after a drop of almost 40% in Chinese equities over the last year.

On 4th May the Federal Reserve announced that it would raise interest rates by half a percent to a target range of 0.75% – 1% and issued plans for reducing the size of its balance sheet. At the press conference following the meeting Jerome Powell stated that “there is a broad sense on the Committee that additional 50 basis point increases should be on the table at the next couple of meetings”. Market prices indicate that there may be three 0.5% hikes between now and the end of September.

In Europe, Christine Lagarde, the European Central Bank (“ECB”) President, said that the first rate hike “will take place sometime after the end of net asset purchases” and that “this could mean a period of only a few weeks”, effectively signalling that in July the ECB may start hiking rates for the first time in over a decade. In the UK, the Bank of England raised interest rates by 0.25% to 1% during the fortnight, their highest level in 13 years.

European voters emphasised their support for Ukraine over the weekend by voting the Ukrainian Kalush Orchestra winners of the Eurovision song contest, a contest from which Russian groups were banned.  Politicians continued their onslaught of sanctions against Russia with G7 nations committing to ban or phase out imports of Russian oil and the US unveiling sanctions against Gazprombank executives and other businesses as part of a new package of sanctions designed to further punish Moscow for its war in Ukraine.

The American economy added 428k jobs to nonfarm payrolls in April, a little ahead of forecasts and the unemployment rate remained stable at 3.6%. Average hourly earnings growth decelerated slightly to 0.3% month-on-month. Elsewhere, real wages in Japan shrank 0.2% year-on-year in March.

China’s exports grew 3.9% year-on-year in April, exceeding market estimates of a 2.7% increase but slowing from a 14.7% growth recorded in the preceding month.

In Europe, German factory orders fell by more than expected at 4.7% in March (a fall of 1.1% had been expected).