Equity markets fell during the second half of July, primarily owing to concerns that economic growth is slowing and that monetary authorities may not loosen policy sufficiently to prevent a slowdown in growth becoming a recession. In recent years, equities have been supported by enough economic growth to enable corporate earnings to grow, but not so strong as to lead to higher interest rates. Investors therefore worry when growth is too low or too high for this scenario to continue. The fear that Central Banks are not acting fast enough in response to slowing growth is creating volatility in pricing, however, in the absence of clear recessionary signals, we are currently maintaining our close to neutral stance towards equities. 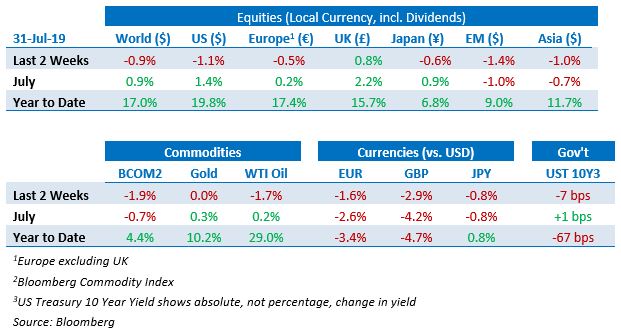 The US Federal Reserve (“Fed”) announced the expected 25 basis points (“bps”) cut in interest rates, the first cut since 2008. In the press conference, Fed Chairman Jerome Powell, initially described this as “a mid-cycle adjustment to policy” and “not the beginning of a lengthy cutting cycle”, although he clarified this later by saying “I didn’t say it’s just one [cut] or anything like that”. The S&P 500 and long dated bond yields fell in response, as Powell’s comments dampened expectations that this will be the first cut of many. That said, the market still believes that the Fed will have to cut rates at least one more time before the end of the year. President Trump was quick to express his opinion, tweeting “Powell let us down…what the market wanted to hear was that this was the beginning of a lengthy and aggressive rate-cutting cycle.”

US-China trade negotiations resumed in Shanghai on Tuesday with face to face talks between US Trade Representative, Lighthizer, US Secretary of the Treasury, Mnuchin, and their Chinese counterparts. The White House said the meetings were “constructive” and that they “expect negotiations on an enforceable trade deal to continue in Washington, D.C., in early September”. Trump’s meeting with seven technology CEOs to discuss resuming sales to Huawei and reports that Chinese importers have begun arranging purchases of US agricultural products seemed to be indications that both sides were prepared to take steps towards a trade deal. However, on 1st August Trump announced that, starting on 1st September, the US will be putting 10% tariffs on another $300bn of Chinese goods, leading to equity markets starting August 1-2% lower.

In Europe, the European Central Bank (“ECB”) did not loosen monetary policy, but its meeting saw renewed support for increasing inflation to the 2% target level and confirmation that the ECB is considering policy measures designed to achieve this. That said, the market’s expectations for more certainty around the resumption of stimulus were not met. When asked about possible stimulus measures, Draghi replied that the Governing Council was “not unanimous” and that they would conduct “further analysis”. The spread between the German 10-year government bond yield and the equivalent Italian bond consequently widened by 1.4bps to 1.98% and between Germany and Spain by 3.7bps to 0.73%, with politics in both countries providing additional concerns. Elsewhere, the European Parliament voted for Ursula von der Leyen, the longest-serving member of German Chancellor Angela Merkel’s cabinet, as the next President of the European Commission with 383 votes, just above the 374 required.

In the UK, two thirds of Conservative Party members voted for Boris Johnson to become its leader and the new Prime Minister. He held his first cabinet meeting on Monday with a commitment to deliver the result required by the 2016 referendum and leave the EU by the 31 October deadline “come what may”. The new cabinet is dominated by Members of Parliament that support the UK’s departure from the EU; this together with the Prime Minister’s rejection of the current Withdrawal Agreement and Michael Gove’s written comment that “No deal is now a very real prospect”, sent sterling significantly lower. At the end of the month the pound stood at 1.216, just a percent away from hitting a 34-year low against the dollar.

The Eurozone’s difficulties remain evident, with Germany’s Ifo Business Climate Index falling to 95.7 in July (97.2 expected), the lowest reading since April 2013 and the fourth consecutive monthly decline. Additionally, Eurozone GDP figures confirmed an ongoing slowdown with Q2 growth of 0.2%, down from 0.4% in Q1. The year-on-year growth rate of 1.1% is the lowest since Q4 2013 with core inflation falling to 0.9% versus 1% expected.

In the US, June retail sales were strong, up 3.4% compared to the same month last year, with the highest quarterly increase since Q4 2005. The July Philadelphia Fed Manufacturing Index number, 21.8, was way ahead of expectations and 21.5 points higher than in June, the biggest increase since 2009. 2.

China’s Manufacturing PMI came in at 49.7 (versus 49.6 expected), the third month in contractionary territory.  The economy grew by 6.2% over the year to the end of the second quarter, its slowest pace since 1992 when quarterly data began. Trump rubbed salt in the wound by tweeting “China is doing very badly, worst year in 27”.

Tactical Positioning Whilst we think the market impact of the coronavirus outbreak will ripple on for a little longer, the setback in share prices is likely to provide a good opportunity for many investors still holding cash. Although comparison with the SARS outbreak in 2003 may not be entirely relevant, the setback caused by SARS […]

Tactical Positioning 2020 started on a positive note, supported by the eventual signing of a ‘phase 1’ trade deal between the US and China. This may be little more than a line in the sand, but it does create a temporary ‘truce’ on an issue which has dogged risk assets for over 18 months. We […]