As we discuss below, price volatility continues in many asset classes, however we sense that equity markets may already have reached a floor, with most indices standing above the level when the invasion of Ukraine began. Equally, the sharp fall in commodity prices in the last few days suggests that some of the more extreme market reactions driven by speculative financial activity rather than user demand may also be easing. Although there are many possible outcomes from the current situation, markets initially moved to discount a relatively bearish scenario. As is often the case when it comes to geo-political developments, the outcome may not be as bad as our worst fears and as investors get to understand the implications of the war for the global economy for 2022, we would anticipate that volatility will reduce, and equity prices could recover further.

The war in Ukraine continues to preoccupy markets, most notably in the wild price movements seen in equities, currencies and commodities but also from a policy perspective. Oil continued its upward march towards the start of the fortnight over concerns of sanctions being placed on Russia by the US and EU.  Brent crude peaked at an intra-day high of $137 a barrel but has since fallen back dramatically to $100 after supply side worries were alleviated with news that the US is considering lifting sanctions on Iran in order to be able to buy their oil. Gas prices in Europe were even more volatile, with Dutch gas futures prices rising more than 300% to €227 per megawatt-hour before falling to €115 by the end of the fortnight. The other commodity subject to wild fluctuations was wheat, which rose more than 40% on fears that the supply from Russia and Ukraine, which produce just under a third of the world’s supply, will be disrupted by the war. In the metals market a Chinese business was forced to buy back huge quantities of nickel after prices rose. The forced buying saw prices rise more than 250% to over $100,000/tonne in two days and led to the closure of trading on the London Metals Exchange, one of many unprecedented events witnessed in recent years.

COVID cases on the increase in China

Russian sovereign debt was downgraded to C grade by Fitch, and they commented that default was ‘imminent’. Reports from US government sources that Russia had requested military and financial support from China were a contributing factor to falls in Chinese markets which were also under pressure from new coronavirus related lockdowns for 17.5m people in Shenzhen and work from home orders for workers in Shanghai’s financial district.

Higher fuel prices can be deflationary

As highlighted in the last bulletin any prolonged period of high prices in commodities will have a dampening effect on growth as a greater proportion of spending has to be allocated towards fuel and food. Energy intensive industries are also vulnerable, and we are already seeing some companies in Europe close because high electricity prices make production unprofitable: in this instance a Czech cyanide manufacturer for the gold mining industry.

How Europe’s Russian gas imports could be reduced 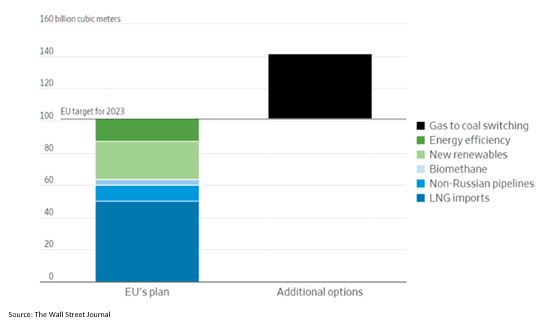 Interest rates on the increase

Monetary policy is tightening in response to higher inflation and this could act as another brake on growth. The ECB announced their intent to reduce the Asset Purchase Programme at a faster rate than had been predicted by the market, bringing the COVID era asset purchasing to an end by the third quarter of this year. Yesterday, as widely anticipated, the Federal Reserve announced a 0.25% rise in interest rates, the first increase since 2018. Had the war in Ukraine not happened the rate rise could have been 0.5%. This is highly likely to be the first of a number of interest rate increases this year that will see rates rise to between 1.5% and 1.75% by year end.

In Europe, the European Central Bank upgraded their inflation forecast for 2022 to 5.1% (up from 3.2% in December) and next year was upgraded to 2.1% from 1.8%. Flash Euro Area CPI was 5.8% for February, also a record since the formation of the euro. Unemployment in the area fell to 6.8% in January, a record low since the formation of the single currency and German industrial production growth of 2.7% for January was well above expectations of 0.5%

In Asia, Japan producer price inflation had a reading of 9.3% year-on-year beating expectations of 8.6% and recording a four decade high. China’s Producer Prices Index measuring manufacturing inflation was 8.8% year-on-year, while consumer inflation was much weaker at 0.9%.

China announced a 5.5% growth target for 2022 which Deutsche bank economists think will require government stimulus to be reached.  China’s Caixin services PMI (Purchasing Managers Index) saw a 6 month low of 50.2 which indicates a slight expansion (above 50 denotes expansion, below 50 contraction).