With markets remaining choppy we continue to try to ensure that we have the right balance of assets to protect against higher inflation and interest rates as well as holdings that protect against a possible recession caused by the combination of higher commodity prices and tighter monetary policy. This means keeping a low exposure to bonds in favour of commodities and within our equity exposure, we are looking for companies that can raise prices to match the increase in input prices. This includes both quality growth companies and companies with cyclical exposure that benefit directly from higher prices. At the margin, we have also looked at trimming overall equity risk back to neutral or slightly underweight given the higher risks at present.

No immediate signs of a ceasefire between Russia and Ukraine

More than 10 million Ukrainians are thought to have fled their homes since Russia first invaded six weeks ago and a potential Russian nuclear attack remains possible. The war, coupled with soaring inflation and rising interest rates, meant that equity markets struggled over the fortnight. The leading technology stocks led the declines falling 7.4%, whilst a flight to safety saw investors send the price of gold up 1.1%. The US dollar rose 2.3% against the euro and is 4.9% higher so far this year.

In the first round of the French Presidential election, the incumbent Emmanuel Macron won with 27.8% of the vote and Marine Le Pen, leader of Rassemblement National (formerly known as the Front National), came second with 23.2%. Round two is on the 24th of April when Le Pen could become France’s first-ever female President. Macron remains the favourite and is hoping for a repeat of 2017 when he won decisively with 66% of the vote, by persuading voters ‘to block the far-right’. If Le Pen wins, she is likely to promote protective measures that could slow growth and slow integration across the EU.

Bonds aggressively sell-off against a backdrop of high inflation

As mentioned in our previous Bulletin, the yield on the 10-year US government bond is normally above the yield on the 2-year and when it is lower it may be perceived as an indicator of a forthcoming recession. The difference hit its lowest level since March 2020 at -0.18% as pressure mounted on the Federal Reserve (“Fed”) to tighten monetary policy to combat inflation, which hit a 40-year high. Subsequently however, the difference in the yield of the two bonds has turned positive again. The rhetoric from the Federal Open Market Committee (“FOMC”) meeting was hawkish (implying monetary policy would tighten further) with James Bullard, President of the St Louis Fed, stating that it would be a “fantasy” to think they could lower inflation without aggressively hiking rates.

Heading back to where it first began, China has been struggling with its worst outbreak of the COVID-19 virus since it first arrived over two years ago. Shanghai was put into lockdown in a bid to curb the rising case levels. Worryingly, as shown by the chart below, the decision had little to no effect on reducing the upwards trajectory. In total 370m Chinese are now in full or partial lockdowns and this will lead to further supply chain disruptions that will reduce the country’s growth (and to a lesser extent global growth) this quarter. Closer to home, the UK’s number of ‘long COVID’ patients (people continuing to experience symptoms for periods longer than four weeks) reached a record high of 1.7 million. There are c.100 million people worldwide who suffer from long COVID. 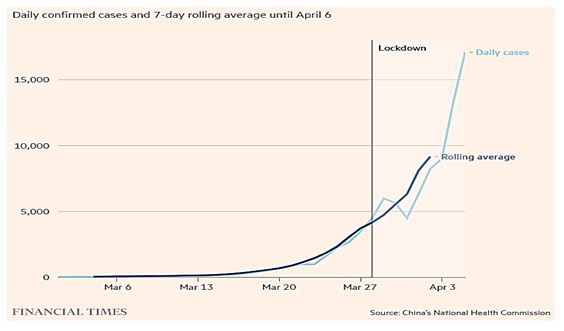 As expected, the Biden administration instructed the largest ever release of oil (180m barrels) from its emergency stockpiles, equivalent to 1 million barrels a day for 6 months, in a bid to control spiralling energy prices and “serve as a bridge” whilst production levels return to normal. The price of West Texas Intermediary (“WTI”) Crude Oil continued to hover around $100 a barrel over the fortnight and in a rare moment of solidarity, the US Senate unanimously agreed (by a staggering 100 votes to 0) to ban oil imports from Russia and Belarus.

The eagerly anticipated US Consumer Price Index (“CPI”) came in at the highest year-on-year reading since March 1981, at +8.5%. “Core” CPI which excludes the impact of food and energy prices rose 6.5%, marginally stronger than expected. It was a similar story on this side of the Atlantic where UK CPI came in at +7.0% versus an expected reading of +6.7%.

US nonfarm payrolls data, which measures the number of workers in the US (excluding farm workers and a handful of other industries), was 431k higher for the month of March, slightly lower than analysts’ forecasts.