So far, August has been a good month for investors with a double-digit recovery in most equity markets since the low levels reached at the start of June supported by an improvement in consumer and investor sentiment. We are hopeful that inflation may start to fall and that as it does monetary tightening and pressures to constrain economic growth will fade and this should support market valuations. That said, the risks, in terms of the threats to corporate profitability and the potential for sustained inflation, remain and for this reason we are keeping a relatively cautious positioning within portfolios.

Honey, I shrunk the economy

Following the United States Federal Reserve’s (“Fed’s”) most recent interest rate rise of 75 basis points (“bps”) in July, and news that the US economy shrank for the second successive quarter, the question is whether a recession has already begun. JPMorgan Chief Executive Officer Jamie Dimon estimates that the chances of a ‘harder recession’ or ‘something worse’ sits at around 20-30%.

This side of the Atlantic, the European Commission anticipates gross domestic product (“GDP”) growth of 0.6% in Q2 across the EU. UK GDP did not perform as well, falling 0.1% in the second quarter of 2022 following a positive Q1 when GDP grew by 0.8%. A major contributor to the contraction in Q2 was a reduction in wholesale and retail business activities, with companies continuing to deal with supply chain disruptions and a drop in sales owing to the rising cost of living and inflationary pressures. Following this, and in a move to combat seemingly ever-rising inflation, the Bank of England announced an increase in interest rates of 50 bps, to 1.75%, as it warned inflation could pass 13% later this year.

As rising costs continue to cause difficulties for households and businesses globally, a sign of easing pressures became apparent with the release of the US July Consumer Price Index (“CPI”). The 8.5% year-on-year increase, and zero increase month-on-month was below economists’ expectations of 9.1% and 0.2%, respectively. Looking at Core CPI, which excludes volatile food and energy prices, the month-on-month increase of 0.3%, compared to 0.7% in June, with a year-on-year increase of 5.9%, unchanged from the previous month. However, given that the University of Michigan’s Consumer Sentiment Index climbed, to 55.1, after hitting a record low of 50 in June, consumer sentiment has recovered recently. The consensus view is that the July inflation figures are unlikely to stop the Fed from its aggressive tightening of monetary policy given that Fed Chair Jerome Powell stated that the Fed is looking for ‘compelling evidence’ that inflation is moving towards its 2% target.

A sense of déjà vu

Food prices steadily increased in June to their highest real levels since the inception of the Food and Agriculture Organisation (“FAO”) of the United Nations (“UN”) Food Price Index in 1961. By contrast, the July release saw the index decline 8.6% from the June release, marking the steepest monthly decline in the index since October 2008; this decline partly reflects a 14.5% decrease in world wheat prices owing to the recently agreed Russo-Ukrainian deal on grain exports. Similar to previous food price crises in 2008 and 2010, this occurred as oil prices spiked higher as demonstrated by the West Texas Intermediate (“WTI”) Crude spot price and Food price indices below. While the decline in food commodity prices was welcomed by Maximo Torero, Chief Economist of the FAO, he noted that many uncertainties remain, such as the continuing high price of fertiliser. 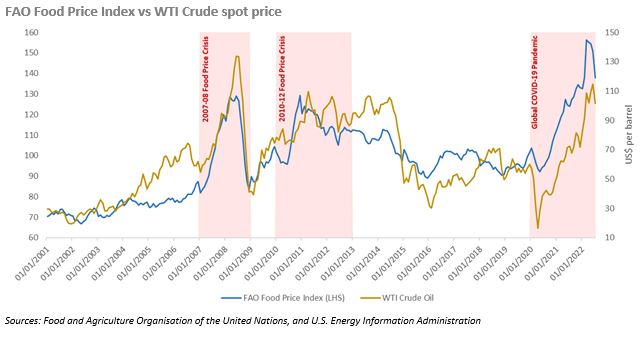 Inflation down, climate up!

During the fortnight, the US Senate and the House of Representatives passed President Biden’s US$430 billion Inflation Reduction Act (“the Act”). This is seen as the biggest climate package in US history, although it is a significantly scaled back version of the original US$3.5 trillion package proposed by the Biden administration. The package legislates for a 15% minimum tax on most corporations that make more than US$1 billion a year in profits as well as a 1% tax on stock repurchases; additionally, tax credits for solar panels, wind turbines and electric vehicles are included. Following news of the passage of the Act, shares in major lithium producers rose as the increase in demand is likely to lead to increased pricing power for producers.

As President Xi Jinping continues with his approach of trying to eliminate COVID completely, it is becoming increasingly apparent that the Chinese economy may not be able to bear the brunt. Blanket lockdowns in several major cities, including Shanghai, have contributed to a slowing in retail sales growth, which was 2.7% for July, largely missing consensus expectations of a 4.9% rise. In an attempt to stifle the decline in consumer demand, the People’s Bank of China cut its medium-term lending rate by 10 bps to 2.75%. Additionally, the central bank is looking to inject up to RMB1 trillion to revive millions of stalled property developments and end a property market downturn which contributed to Q2 growth of only 0.4%.