Over the last 2 weeks, equity market volatility seems to have partially subsided as investors hope that higher interest rates may only be a short-term measure to dampen demand. Certainly, the recent falls in commodity prices suggest that inflation levels may be headed lower by the end of the Summer. In terms of positioning, growth style equities have taken a lead in the last 4 weeks sensing that bond yields may have peaked. However, for this trend to continue, the current corporate earnings reporting season needs to avoid nasty shocks and the Federal Reserve’s (“Fed”) rate fixing meeting at the end of July needs to show policy clarity. Any hint that the Fed does not need to be so hawkish on interest rate policy by the end of 2022 would be taken as good news by markets, but risks of a hard landing remain. In terms of portfolio strategy we remain pragmatic but are sensing that equity markets appear to be consolidating at current levels which makes us reticent to reduce risk.

The euro fell below parity with the US dollar for the first time in two decades as fears of a recession in Europe intensified. The fall from $1.13 at the beginning of the year to $1 on Wednesday came amid fears that Russia may cut off its already diminished supply of natural gas to Europe, potentially forcing energy rationing. This has highlighted the widening differences between the economic prospects of the US and the eurozone, which is more exposed to the fallout of the war in Ukraine. Bank of France Governor François Villeroy de Galhau, who also sits on the ECB governing council, stated “It’s good news for activity as it supports exporters but unfortunately it raises inflation”. This week’s planned rate move by the ECB would only bring the deposit rate to -0.25% which has led to calls from within the ECB to start with a more forceful half-point step.

Last week the yield on the benchmark 10-year US Treasury note fell below 3% and the yield on 2-year Treasuries is now almost 0.2% above the yield on 10-year bonds, the widest premium since 2000. The higher shorter-term yield reflects the anticipated Fed rate hikes, while the lower longer-term rates signal weaker expectations for growth. Historically, this inversion of yields, with shorter dated bonds yielding more than longer dated has been a reliable indicator of a recession occurring (on average) 15 months after the signal.

US inflation exceeded consensus expectations once again in June, with the consumer price index (“CPI”) rising 9.1% year-on-year. This is the fourth straight month that the headline annual figure topped estimates and it marks the steepest rise in inflation in over 40 years, likely strengthening the Fed’s resolve to raise interest rates aggressively which, in turn, will upend the economic expansion. The inflation numbers in parallel with June’s strong employment report have led to a shift in market pricing for the July Fed meeting. The debate has moved expectations for the likely increase in interest rates 25bps higher to either 75bps or 100 bps with markets currently pricing in a 50% probability to each outcome. Since June, commodity prices have fallen sharply with crude oil (West Texas Intermediate) declining last week to its lowest level since the start of the Ukraine invasion, briefly trading at $91. While this is a step towards lower inflation, it could take at least two to three months to gauge whether headline and core CPI are on a downwards trajectory. 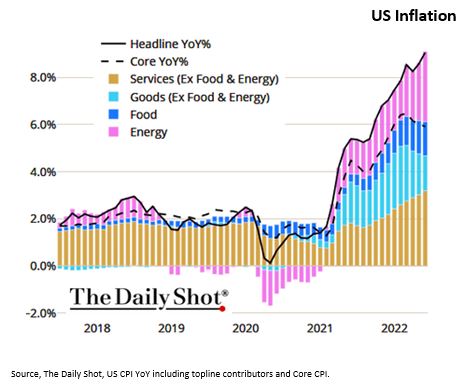 Boris Johnson was forced to resign after losing the support of the bulk of Conservative MPs after nearly three years at 10 Downing Street. Mass ministerial resignations, triggered by the exits of Health Secretary Sajid Javid and Chancellor Rishi Sunak made it difficult for Johnson to appoint a new government. Despite initially rising on the news, the pound continues to weaken against the dollar and is as low as it was in the immediate aftermath of the Brexit vote. For the UK’s stock market, the weakening pound could prove to be a positive given that 75% of the sales of the largest companies are outside the UK. Looking ahead, the outlook for UK policies and public finances hinges on who Johnson’s replacement will be. Sunak is having to defend tax rises introduced during his time as chancellor, including April’s hike in National Insurance to pay for social care and the NHS. Another candidate in the race, Penny Mordaunt, has said the limited tax cuts she advocated were not inflationary and people now need help with the cost of living.

In the US, retail sales rose 1.0% in June, slightly above the expected 0.8%, despite surging inflation and recently weak consumer sentiment. Manufacturing production fell 0.5% in June, solidifying a decline for the second straight month, implying a softening of demand. US Nonfarm payrolls were better than market forecasts adding 372K payrolls in June.

China’s economy grew at the slowest pace since their first Covid-19 outbreak in 2020. The second quarter reading of GDP fell short of its 1.0% year on year prediction, only reporting a 0.4% expansion in gross domestic product reported for the three months to June. The strict Covid related lockdowns China imposed are a contributing factor to the slow economic growth.

The German Manufacturing Purchasing Managers Index registered as expected at 52.0; however, German ZEW economic sentiment tumbled to -53.8 in July from -28.0 in June. UK manufacturing fell to a two-year low of 52.8, down from 54.6 in May, while UK GDP (YoY) surpassed expectations and rose to 3.5%.