After an extremely difficult month which has witnessed a collapse in investor sentiment, ‘oversold’ indicators are starting to flash in many equity markets. However, any rally may wait until the April US inflation data (CPI) is released on 11th May. This is expected to show that year on year inflation comparisons are starting to improve, helped by lower commodity prices over the last 6 weeks. We expect that the Federal Reserve will not raise rates as fast as market participants expect as we move to the second half of the year if commodities weaken further. If this becomes a reality, it should provide the oxygen equity markets need to sustain a recovery, whilst in the meantime we are comfortable having reduced exposure to growth equities within portfolios. 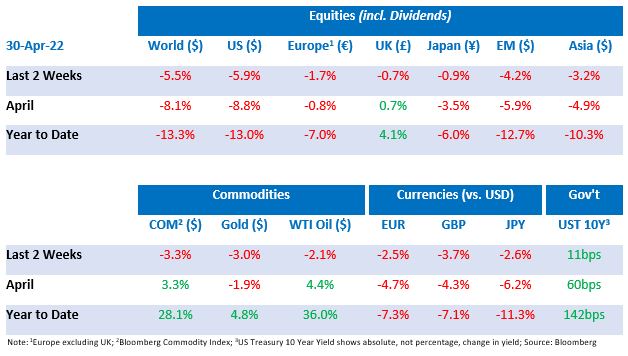 The current de facto global reserve currency continued its upward trajectory over the fortnight, reaching new highs against the euro, pound and yen. The dollar index, which measures how the dollar is valued against a basket of currencies, is set to reach its highest level in 20 years. The strong performance reflects the increasing interest rate differential which looks set to continue as the Federal Reserve indicated this week that there is a high probability of a 0.5% rate increase at the next rate Federal Open Market Committee meeting in May.

The war in Ukraine and global growth

The ongoing war in Ukraine is leading to lower growth forecasts and expectations of a fragmented global economy for years to come. The IMF cut its global growth forecasts for 2022 to 3.6% down from the previous estimate of 4.4%. Growth projections for 2023 are similarly expected to slow to 3.6%. Exacerbating the gloomy picture in Europe, Russia’s state-owned Gazprom shut off supplies of natural gas to Poland and Bulgaria after both countries refused to pay in rubles. The decision puts further pressure on the European Commission, which previously had imported just under half of all its natural gas from Russia, to find alternative sources and to become less dependent on Moscow.

The incumbent French President, Emmanuel Macron, won an historic second term, the first to do so in 20 years. A decisive win against his far-right rival, Marine Le Pen, who, if victorious, vowed to impose a political programme that would fundamentally change not only the country’s economy and society but the French constitution. It’s not all plain sailing for Macron, however, who is facing the continued prospect of rising inflation which unexpectedly reached new levels in April up 5.4% year on year. At the legislative elections next month, rivals of Macron will accuse him of not doing enough to keep inflation under control.

Shares in Twitter rose 5.7% on the news that Tesla founder, Elon Musk, came to an agreement to purchase the social media site for approximately $44 billion, leading the way to the privatisation of the company. The acquisition is likely to impact the social media environment for many years, with some prominent individuals already denouncing the billionaire’s acquisition and stepping away from the platform. The company beat earnings forecasts despite revenue falling below expectations and advised in light of the acquisition that they would not be providing forward guidance. In other quarterly results, Netflix’s first drop in users in over a decade led to the stock plummeting by 37% on the day. Conversely, Meta, reported strong subscriber numbers from its Facebook platform with the number of active users growing to just shy of 2 billion during the first quarter. Amazon experienced its slowest growth in over two decades reporting a slip of 3% in online sales in the first three months of the year leading to the company’s stock price falling over 14%.

In the last Bulletin, we discussed the re-emergence of COVID-19 in China and how its zero COVID policy will lead to supply chain disruptions impacting growth locally and perhaps globally given that the country accounts for roughly 12% of global trade. The emerging picture from Shanghai, where the lockdown entered its fourth week, remains bleak with much of the city blocked off. Ships loitering in the city’s port, which is functioning in a limited capacity, have increased significantly. Despite congestion often being worse at this time of the year, the chart below paints a troubling picture, showing the steep increase in the number of ships waiting to load or discharge in Shanghai. 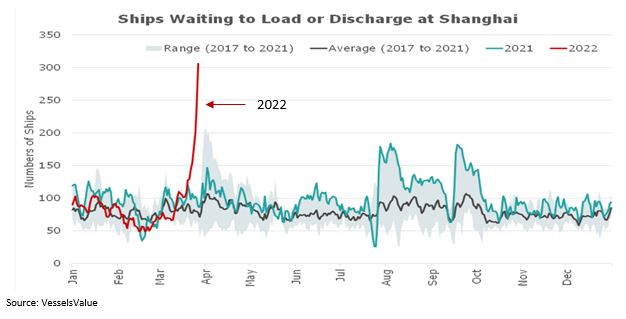 Consumer sentiment in the US in April was 65.7 an increase of 9.8% from the 11 year low of 59.4 in March, suggesting consumers believe that oil prices have begun to stabilise. In the housing market, homebuyers are beginning to feel the effects of rising inflation and mortgage rates with sales of new and existing homes falling again in April by 8.6% and 2.7% respectively, although housing starts unexpectedly increased by 0.3%.

Rising inflation continues to reverberate globally with headline inflation in the euro zone reaching 7.4% in April. European Central Bank vice-president Luis de Guindos advised that the surge in inflation may be close to reaching its peak and he expects to see the start of a decline later in the year.