The second half of 2022 can hardly be a repeat of the first six months which delivered a unique and uncomfortable ‘nexus’ of issues that has spooked investors across the board. Although we will see some earnings downgrades in certain industries, as the recent buoyant US durable goods orders data shows (mentioned below), it is by no means certain that a serious recession is at hand. Currently, markets seem positioned for a relatively hard landing and that perception could persist into the Summer as investors and central bankers quit their desks for the holiday season. The reality could be different if interest rate expectations reduce. For that to happen, perceptions on inflation need to moderate and this looks increasingly possible given that commodity prices may have peaked, with oil down 8.2% in June, agricultural commodities down 9.2% and metals down 18.6%. In the short term, we are avoiding big changes in portfolio positioning as we enter the Q2 US Corporate results season. We will be looking to see how share prices react to both good and bad results as this may give an indication as to whether markets sentiment has passed its lowest point. 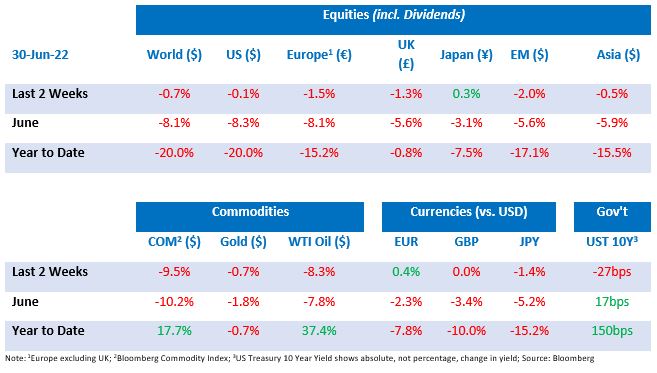 The prospect of both Europe and the US sliding into a recession continued to dominate markets over the fortnight. The perceived threat of higher inflation, weak economic data and concerns that central banks may be tightening monetary policy too quickly, combined with poor consumer sentiment, has been difficult for markets to navigate. The rhetoric coming from the Federal Reserve (“FED”) Chair Jerome Powell was that the likelihood of a recession was “certainly a possibility” in the US, something President Biden will be keen to quash ahead of the midterm elections in November. Moody’s Analytics Chief Economist, Mark Zandi, remarked that the risks of a US recession were “uncomfortably high”, contrary to St. Louis Fed President Jim Bullard’s belief that a US recession was “unlikely”. This uncertainty contributed to US equites marking the worst first half-year performance since 1970, falling 20%, back to levels of February 2021.

The UK CPI print came in at a year-on-year reading of 9.1% for May, in line with market expectations. This was the highest figure since 1982 and an unwelcome announcement for UK citizens already battling a cost-of-living crisis. Catherine Mann, one of the Monetary Policy Committee’s (“MPC”) more hawkish members, indicated that inflation could rise even further if “more robust” interest rate hikes were not implemented. UK equities have been one of the most resilient markets in 2022 falling ‘only’ 0.8%, largely helped by exposure to commodities and the energy sector. Most notably the price of oil, has continued its stellar performance of 2021, with WTI (West Texas Intermediate) up 37.4% in 2022. Accounting firm PWC gave half of their employees a pay rise of at least 9% to offset the effects of inflation, the largest increase in a decade.

As noted in our previous bulletin, lockdown measures were re-introduced in some states of China which heavily impacted the country’s demand and production of goods and services. Fortunately, China’s attitude towards a zero Covid policy (which it has been deeply committed to) witnessed some light relief as it was announced over the fortnight that the isolation period for international travellers entering the country was to be reduced from a fortnight to a week. More broadly, the Chinese market has rallied 7.3% over the month to the end of June, predominantly aided by additional monetary support that has been provided by the People’s Bank of China (“PBOC”) to help with the cost of the covid outbreak. Moreover, China’s industrial profits contracted at a slightly slower pace in May, falling 6.5% year on year, an improvement on the fall of 8.5% in April, as company workers returned to manufacturing hubs amid the easing of Covid restrictions. Companies and investors alike will be hoping that China’s strict quarantine requirements will not be re-instated.

A bundle of nerves

There was a raft of lacklustre consumer confidence releases over the fortnight with many European countries producing data which overwhelmingly disappointed. Consumer Confidence Indicators show how optimistic households are about their personal financial situation based on questions around the general economic situation. Both Germany and the Czech Republic posted record low readings, as shown below, whilst the consumer confidence reading measured by the French National Institute of Statistics and Economic Studies (INSEE) index, fell to levels not seen since 2013.

New orders for US-made durable goods, a reading which measures the number of orders placed with US factories, climbed 0.7% in the month of May, well above the projection of 0.1%, showing some resilience in the manufacturing sector.

Both Japanese and French inflation readings came in as expected, at +2.1% and +6.5% year-on-year respectively, whilst the University of Michigan downgraded their forecasts of long-term US inflation to +3.1%, from +3.3%. Germany saw their EU Harmonised measure come in at +8.2%, which was below the predicted reading of +8.8%.