Equity markets fell by close to 6% in the first quarter. Bond markets also fell with US Treasuries down around 6% on the back of higher inflation, increasing interest rates and expectations of further rate rises to come. Equity markets rose during the fortnight under review, supported by hopes that we may see a de-escalation of the war in Ukraine. The war could mark a turning point in the growth rate of the global economy and global trade. Economic growth forecasts for 2022 have fallen, although we still expect good earnings growth for companies and anticipate that this should support equity prices through the rest of the year.  That said the recent rally in market prices has probably gone far enough for now. 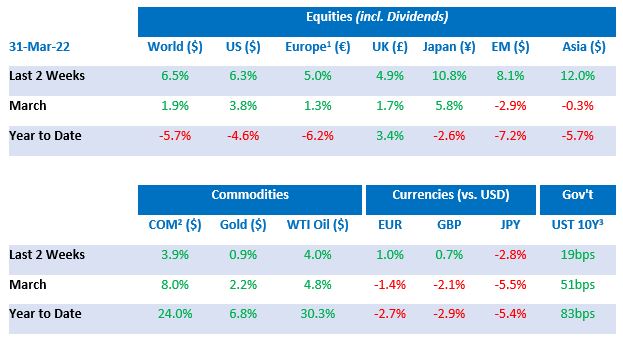 Markets rode a rollercoaster in the first quarter of this year. The year started with US equity markets at all-time highs but reached an intra-quarter low on 8 March, down over 13%. The US market has risen approximately 8% since that low point and now sits only 5% below where the quarter began. Tightening monetary policy, the Russian invasion of Ukraine and the knock-on effect to many other industries explain the fall in equity markets, whilst hopes that the war and inflationary will be transitory are the main reasons for the recovery.

While much of the focus has been on Russia, the environment in China is probably more significant for investors. According to Nomura, economic activity could deteriorate, weighed down by continued pandemic related restrictions on movement and a prolonged property sector slump. However, the Chinese government have announced that they will take measures to boost the economy and introduce market friendly policies. These are likely to include lowering the required banking reserves ratio, cutting the benchmark lending rate, pausing proposed tax hikes and a potentially lighter regulatory hand (compared to the technology company crackdowns in 2021).

The difference between the 10 year and the 2 year US Government Bond yields, reached -0.001 intra-day on Thursday 31 March, its lowest level since September 2019. When this metric is below 0 for a sustained period, it is believed to signal an economic slowdown in the next 18 months. However, the metric reached similar levels in 1994 without a subsequent prolonged downturn in the economy. Elsewhere, the GfK Consumer Confidence Index in the UK fell for the fourth month in a row to -31 in March, the lowest level since November 2020. Readings below -30 have correctly indicated a recession in four out of the five occasions since the survey began in 1974.

The US Federal Reserve (“Fed”) raised interest rates for the first time since the start of the pandemic, to 0.5%. Meanwhile in the UK, the Bank of England (“BoE”) also raised rates to 0.75%, where they stood pre-pandemic. This contrasts with the European Central Bank (“ECB”) which held rates steady earlier this month, despite the European Harmonised Index of Consumer Prices reaching levels not seen since before 1997. Whilst the ECB is keen to point out the differences in economic cycle between the EU and US, it seems highly likely that the ECB will have to follow the Fed and BoE soon given the pick-up in inflation.

As the Ukrainian crisis has deepened oil and gas prices have risen significantly, and this has caused many countries to assess their exposure. Germany plans to reduce reliance on Russian gas in a number of ways including constructing new liquefied natural gas (“LNG”) terminals to import gas from the US and building more sustainable energy capacity. The US has announced that it will release a record amount of its strategic petroleum reserve in the hope that this will further curb price increases on an already-stretched US consumer.

Across Europe, the consumer prices index (“CPI”) data for March for many countries was considerably higher than the level a year earlier: German CPI at 7.3%, French 4.5% and Italian 6.7%, were all above predictions. In the United Kingdom CPI for February was 6.2% higher than last year.

Chinese data was somewhat lacklustre with the manufacturing PMI for March at 49.5, missing analyst expectations of 49.9 and the non-manufacturing PMI was 48.4, lower than February’s 51.6 data point.