It feels impossible to be unaffected by the full-scale invasion of Ukraine. Most importantly, we are concerned for the Ukrainian people in the coming months.

We are also concerned about the long-term consequences of this war. The invasion could be a turning point for the whole of Europe, but for financial markets the impact is likely to be less significant. For now, the increase in the price of oil and gas will push inflation higher, but higher energy prices are known to dampen growth and can therefore help to alleviate inflationary pressures elsewhere. In response to the crisis, it is anticipated that central banks will raise interest rates more slowly and this will be viewed positively by markets. Within portfolios we increased exposure to broader commodities over a year ago and more recently have increased our exposure to cyclical sectors of the equity market. Some of these could benefit as spending on areas such as investment in energy infrastructure increase.  Otherwise, we do not plan to make major moves in portfolios in response to the invasion.

Market moves have been quick and substantial in the last week. Having started the year poorly, equity markets have fallen further on the back of news of the invasion as investors try to price in the increased uncertainty it creates.

Volatility and the flight to safety

Commodities produced by Russia or Ukraine, such as gas, oil and wheat have moved higher, and ‘safe-haven’ assets, like gold, the US dollar, the Swiss Franc and US Treasuries have all risen. Russia’s actions had been flagged, yet equities fell further on the news of the start of the invasion. In Europe, German equities, one of the main markets most exposed to Russia, fell 3.2% on the day, with US large capitalisation equities down almost 15% from their peak on 3rd January. Emerging market indices were down nearly 5% over the fortnight with markets in Eastern Europe and Russia hit hardest – we have minimal exposure to these markets and managers that had any direct exposure in their funds have tended to liquidate their holdings in Russia over the last few weeks.

Reputational risk is abundant. Investors and companies are dissociating themselves from Russia as Western governments increase sanctions. Some Russian banks have been excluded from the SWIFT international payments system and Germany has pulled the Nord Stream 2 gas pipeline. The 40% fall in the rouble against the dollar has led to mass cash withdrawals by Russian citizens worried about the viability of these banks and the Russian central bank raised interest rates to 20% (from 9.5%), citing that ‘external conditions for the economy have changed drastically’. Firms are accepting financial losses by pulling the plug on connections with Russia and sporting events worldwide are ousting Russian presence. But this isn’t a one-way sting. Russia accounts for 13% of global oil production and 17% of global natural gas production. Europe relies on it, we understand that 25% of crude oil, and 40% of natural gas that the European Union uses comes from Russia. Sadly, the reliance on Russian oil and gas effectively funds part of their ambitions in Ukraine. It is unlikely Russia will cut off gas supplies, given the revenue it receives.

The increase in energy price rises is pushing headline inflation higher in the short term and may also cause a recession – since the 1970’s, recessions have normally occurred after oil prices double.

Central bankers are in a difficult position. War is typically inflationary and interest rates already look too low given the high level of inflation, but raising interest rates could reduce demand when consumers may already be tightening spending to cover the cost of expensive essentials such as fuel and food. On balance, the Fed is likely to start raising rates in March to reduce inflationary pressures, but it will not raise rates as much as previously forecast. The conflict has caused the March Fed hike expectations to fall from 0.48% to 0.25% and traders now believe that the European Central Bank will put off raising rates until 2023. In general, bond pricing points to most investors thinking that inflation will be only transitory. 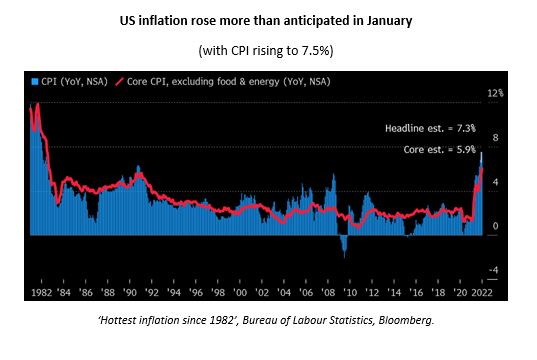 What next for investors?

The conflict unfolding is clearly a humanitarian crisis, whilst the impact on asset prices overall will probably be limited in the long run. Market participants understand this and, other than the significant boost to the share prices of companies making military equipment, the price changes we are seeing primarily reflect short-term economic issues and risks rather than longer term geopolitical ramifications. That said, we may see new long term investment themes start to develop over the coming months.

CPI inflation came in at 5.5% in the UK. The US and UK saw strong retail sales growth. Against this, jobless claims in the US were 29k worse (higher) than expected at 248k. The US housing market wobbled with new and pending home sales down from last month although existing home sales, performed well. It was announced that the US economy grew an annualised 7% in Q4 2021, up from 6.9% the previous quarter.